By: Derek Tan
In: Funding 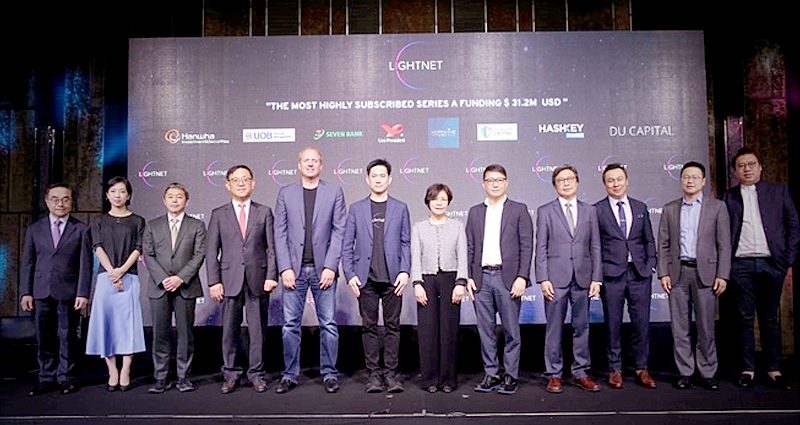 Lightnet, a blockchain technology fintech startup based in Thailand’s capital of Bangkok, had recently secured US$32 million in a Series A funding round led by UOB Venture Management, which is the private equity unit of United Overseas Bank (UOB). The Series A funding round, which is one of Southeast Asia’s largest to date, saw the participation of other notable investors including Signum Capital, a Singapore-based firm with a focus on blockchain startups and companies; Uni-President Asset Holdings, the investment arm of Uni-President Enterprises Corp., the Taiwan-based international food conglomerate; HashKey Capital, a Hong Kong-based token fund with a focus on blockchain; Hanwha Investment and Securities, a member of South Korea conglomerate Hanwha Group; Seven Bank, a Japanese bank that is a subsidiary of Seven & I Holdings Co.; Du Capital, a Singapore-based multi-stage investment firm; and Hopeshine Ventures, a Singapore-based management consulting services company. UOB Venture Management, Seven Bank and Hanwha Investment and Securities represented the largest investors for Lightnet’s Series A financing round. The newly acquired funds from its completed round will enable the fintech startup to further invest in its Stellar network’s blockchain technology backbone, as well as to innovate and develop a next-gen financial mobility ecosystem.

According to Chatchaval Jiaravanon, Lightnet’s chairman, the fintech startup was established with the goal of bridging the divide between current banking rail and non-bank agents in order to provide affordable, inclusive financial solutions to people across the Asia Pacific region, enabled by instantaneous and seamless transactions that can also strengthen financial mobility across sectors and borders. Powered by the Stellar network’s transformative, rapid and scalable blockchain tech, Lightnet is able to significantly lower end-to-end settlement times, provide full visibility that allows for data-rich transactions, and become the region’s premier centralized settlement hub.

The blockchain-enabled fintech startup has its eyes set firmly on dislodging the legacy SWIFT network and other inefficient and opaque underground banking systems as the preferred remittance services provider across Southeast Asia, especially for the region’s huge population of underbanked and underserved migrant workers, through its 3 solutions in SmartNet, LiquidNet and BridgeNet. Tridbodi Arunanondchai, Lightnet’s vice chairman, said that the blockchain-powered fintech startup is focusing on developing a comprehensive ecosystem that will grant Lightnet seamless access to their partners’ large user base in order to expand their reach into more regional markets. Tribodi also added that the company, aided by its extensive network of partners, is expected to handle more than US$50 billion worth of transactions annually within a timeframe of just 3 years.

On their far-reaching network of partners, Suvicha Sudcha, chief executive officer at Lightnet, said that the fintech startup is looking to work closely with the dominant remittance and payment players in the region in order to integrate their solutions and network together, including Seven Bank, Ksher, MoneyGram and Yeahka, in order to ensure the success of their next generation financial ecosystem. Additionally, Lightnet also noted that there are potentially more than half a million cash agents spread across their ecosystem, with which the fintech startup can leverage on to fulfill their solutions and services.

By completing one of the region’s largest Series A funding rounds thus far, backed by several of the region’s large conglomerates, the blockchain-powered fintech startup Lightnet is proving Thailand’s mettle in Southeast Asia’s startup scene. Through leveraging on its strategic partnerships with the region’s leading remittance and payment providers, innovative application of blockchain technology and the Stellar network, the next-gen financial network startup will seek to disrupt the region’s remittance market and bring true interoperability in order to provide instantaneous and efficient transactions across Southeast Asia.